Architectural expression is at its finest when enveloping museums and performing art centers. The building skin may convey creativity and ambition to make an iconic, timeless statement. In museums, the result is often an increase in opacity in the facade with deliberate, controlled daylighting to gallery and circulation spaces. In performing arts centers, dramatic atrium spaces take center stage. Cultural projects have a tremendous ability to project a meaningful message with a unique facade while incorporating high-quality performance that will endure.

Enclos demonstrated the innovative thinking, engineering expertise, and collaborative approach required to develop a design that would fulfill all of the performance needs of the [SFMoMA] curatorial staff, the aesthetic desires of the Board of Trustees and the architect, and the realities of construction cost and schedule. Chris’ experience at the National Museum of African American History and Culture (NMAAHC) and the Virginia Museum of Fine Arts have shaped his sensitivity to the sharper expectations associated with signature projects. He and his team are skilled in coordinating the unique schedule, sequence, and logistical challenges of delivering world-class museums. 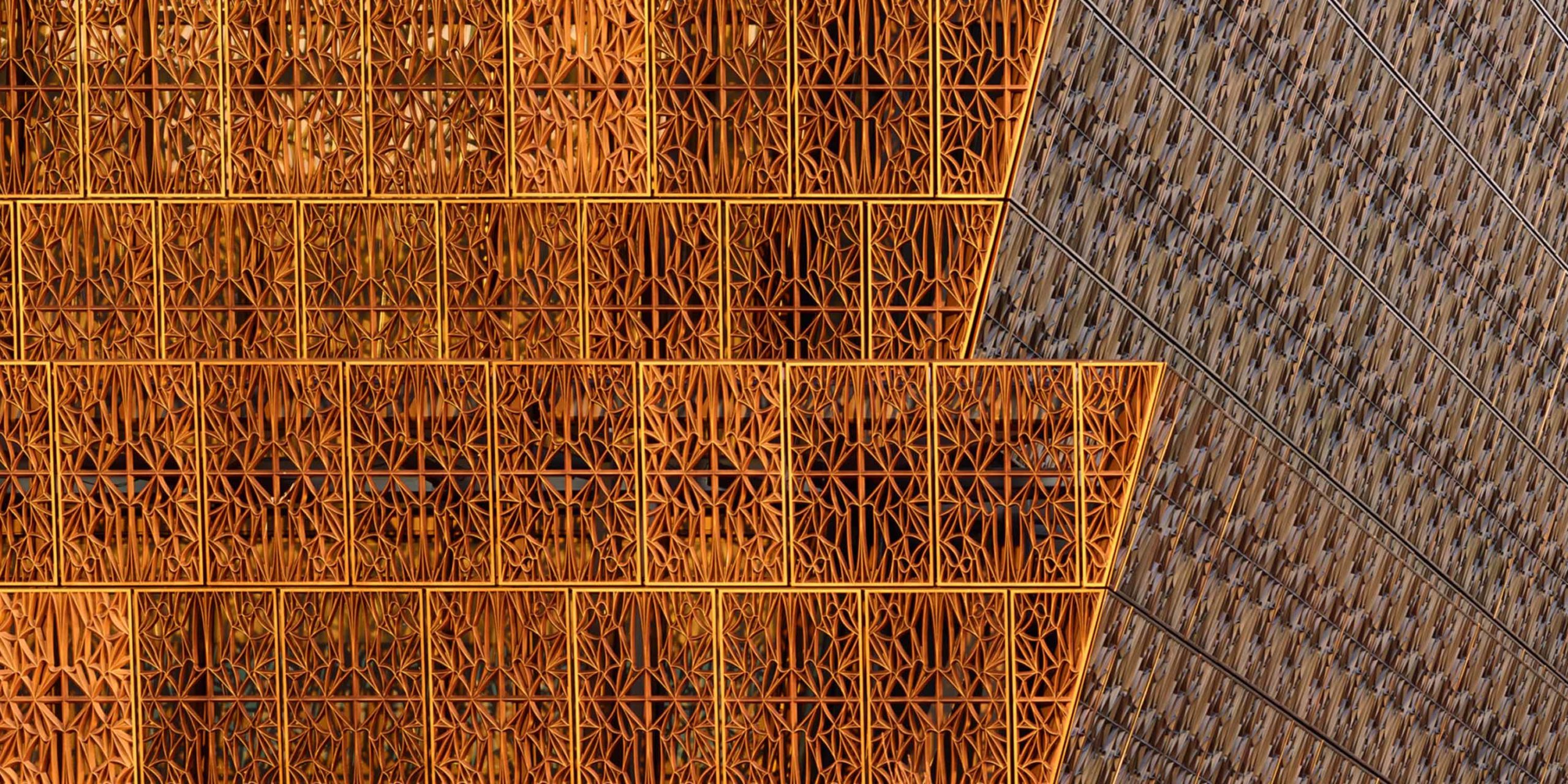 The 19th museum of the Smithsonian Institution sits prominently on the National Mall of the United States, located adjacent to the Washington Monument and with views of the White House. The 10-story museum (five above ground) includes 250,000 sqft of building envelope, primarily consisting of a multi-layered skin with a permeable filigree exterior of bronze-colored panels inspired by Southern ironwork. The panels act as a brise soleil, helping to reduce solar heat gain and glare while still providing the building with openness to daylight. The Snøhetta-designed SFMOMA Expansion amends the Mario Botta-design building that first debuted in 1995. A primary feature of the 10-story expansion is the rippling horizontal bands of the facade that were inspired by the fog and waters of the San Francisco Bay. The feature wall – the largest architectural application of fiberglass reinforced plastic (FRP) in the United States at the time – consists of a composite assembly of an opaque FRP rain-screen panel in front of an insulated unitized backup system. When the Virginia Museum of Fine Arts set out to transform its space with a “bigger, brighter, and more welcoming” program, it did so from a very specific vision: transparency through major expanses of glass. There is no better building material than glass to provide optimum transparency in the building envelope, and the architectural team designed the largest expansion in the museum’s history to shower occupants with natural light. Cathedral of Christ the Light

The Cathedral sits along Lake Merritt and rises 136´ with a vessel-like structure of wooden ribs and a glass veil. 46,000 sqft of glass wrap the building by attaching 1,028 curtainwall units to the 12-story domed structure’s curved fir beams. At each end, expansive glass surfaces comprised of triangular point-supported glazing make up the Alpha and Omega walls. Interior louvers and perforated metal panels filter the daylight to create an ethereal space. The showcase feature of OCPAC is the Renée and Henry Segerstrom Concert Hall’s sweeping glass facade, in which Enclos provided design/build services. The curvilinear shell stands 87´ high and stretches over 300´ long, providing a transparent enclosure to three levels of the grand lobby, terraces, and restaurant. The wavelike facade consists of 30,000 square feet of curved laminated glass. The Getty Center is a monumental 12-building complex overlooking Los Angeles and the Pacific Ocean. The esteemed civic space includes a renowned museum, concert hall, research facility, office complex, and library. A total of 7,116 curtainwall units wrap the exterior, including 4,534 unique configurations, each with a precise designated location. Ranging from 2.5´ to 10´ wide, glass, travertine, and metal panel units align with the 30˝ underlying architectural grid. The scale and grace of the facade within the landscape are one-of-a-kind.