It is an exciting time for the development of advanced facade technology. At the same time, the fundamentals of skilled curtainwall design remain critical.

Curtainwall is a prefabricated, modular approach to cladding large buildings. Curtainwall systems are typically “hung” from the building structure (hence the “curtain” reference), attached to the floor slabs, and do not carry any dead loads imposed from the building structure. The units are designed to support their self-weight and to transfer horizontal loads (wind) incident upon them to the primary building structure. Special design considerations can include daylighting, thermal, acoustical, security, and blast-resistant performance. Curtainwall designs for large buildings are almost always custom to individual project requirements.

Resisting air and water infiltration is the primary function of the curtainwall, as well as providing a thermal barrier between inside and out. Curtainwall systems are also designed to accommodate the complexities of deflections, thermal expansion and contraction, building sway, and relative movements between floors caused by wind or seismic loads acting on the structure. The convergence of all these performance issues is controlled at what is called the stack joint, the location where one floor of units interlocks with the units above or below. The importance of the stack joint cannot be overstated as it is a crucial performance detail, providing: continuity of air and water resistance; accommodating environmental and building movements; and permitting an efficient, modular installation.

This virtual simulation outlines the procedures that go into assembling a curtainwall frame in a shop environment. The video is one of five in the From Billet to Building educational series.

Curtainwall designs typically integrate cladding materials that are framed and fixed in place by extruded aluminum components. There are two basic categories of system types, unitized and stick, with the principal difference being where the assembly of the system takes place. The most efficient system type is a unitized system due to its concentration of fabrication and assembly in a controlled factory setting. Whereas, a stick system approach executes all assembly, glazing, and installation in the field. Enclos seeks to maximize the use of unitized systems in part for its ease of installation due to its interlocking, dry-gasketed details between units. That said, there are applications, such as storefronts or specialty structures, where our technical personnel may suggest a stick-built approach.

Glass is the most common infill material used in curtainwall systems, but other cladding materials include metal panels, natural stone, and terracotta. Curtainwall systems typically span across floor slabs, creating a need for opaque cladding material to conceal the slab edge, fire-safing, and any between-floor mechanical systems. A spandrel panel is often located between vision glass panels to conceal this area. To achieve opacity, spandrel glass may be treated with a ceramic coating (called a frit), a film, or is incorporated into an assembly called a shadow box.

One fundamental consideration that impacts every building project without exception is the method of attachment for the curtainwall system’s anchorage to the building. Anchor design can affect many things beyond the immediate curtainwall design, including the work of other trades and the design of building interiors. Enclos anchor designs can be positioned on the face, top or bottom of the slab, or recessed in any of these positions. The Enclos anchoring method is highly efficient, provides adjustability in all directs to accommodate mutually-agreed-upon tolerances, speeds field installation of the curtainwall, and offers optimum economy for the building developer.

Curtainwall anchor setting occurs prior to the commencement of unit installation. If the anchors are to be recessed, they may get set before the concrete floor slab pour or provisions made for a cavity in the slab into which the anchor assembly installs. Embed layout and anchorage designs are some of the first details to be coordinated for a project.

Installation strategy is highly sensitive to a specific site, schedule, and coordination requirements. The requirements of the building site drive Enclos operations. Unitized curtainwall systems provide optimal flexibility in this regard. Materials can be fabricated, assembled, and stored offsite, and be delivered on a just-in-time basis as required to support installation crews, thus minimizing on-site storage and staging requirements on highly congested building sites. Assembled units arrive at the site on open flatbed trailers. The units can be lifted by crane from the trailer and directly set in place on the building facade. 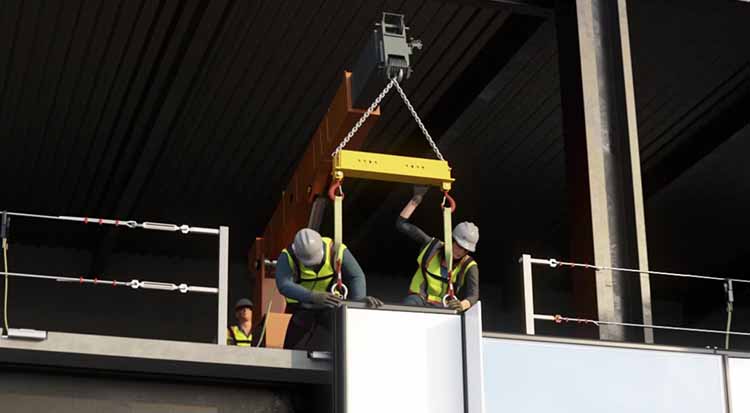 Project sites, crane locations, and building features factor into selection of the optimal curtainwall unit installation approach. Several of the most common strategies are presented in this video from the From Billet to Building educational series.

Alternatively, units can be designed to install from inside the building, lowering from floor levels above. Installation crews working from a floor above use a small jib crane to lower the units to a setting crew below. Other techniques are possible depending upon specific project requirements.

Installation strategy, site logistics, and operations are among the greatest strengths of Enclos and represent the capability most valued by our general contracting clients. Similar to how we address project designs with a custom solution, so are our field operations—project-specific and tailored to the site conditions.